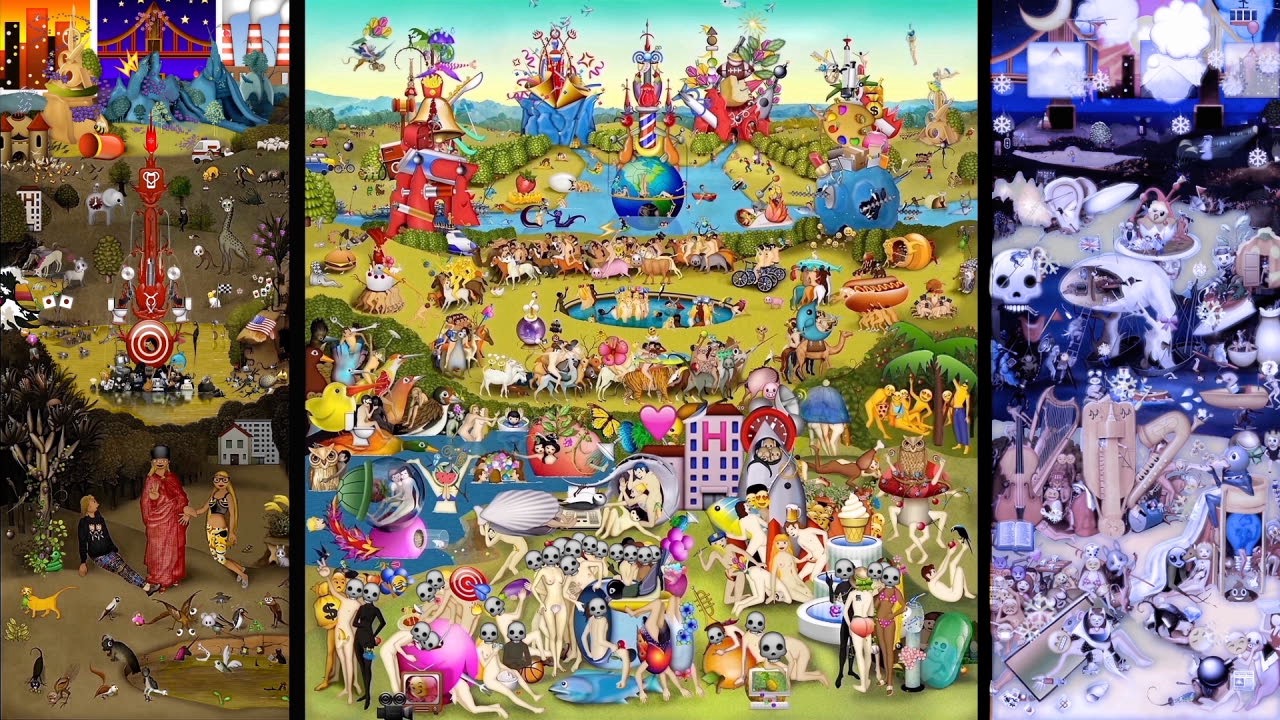 Carla Gannis is an inter-media artist whose work reflects the transformative nature of our time. In her piece “Garden of Emoji Delights”, she uses “emojis” to re-invent Bosch’s famous triptych “Garden of Earthly Delights” by replacing religious vocabulary with secular and digital symbols from popular culture. The result is fresh and  dynamic. Here is our short interview with Brooklyn-based artist Carla Gannis.

“Garden of Emoji Delights” is the only piece in our festival that is part of a larger installation.

Yes, “The Garden of Emoji Delights (#GOED)” in triptych form, exists as a video, 1920 x 1080 pixels, and also as a digital C-print measuring 13ft x 7ft. Additionally the project includes 3D prints, digital drawings, and a series of video vignettes that focus on details from the larger work. 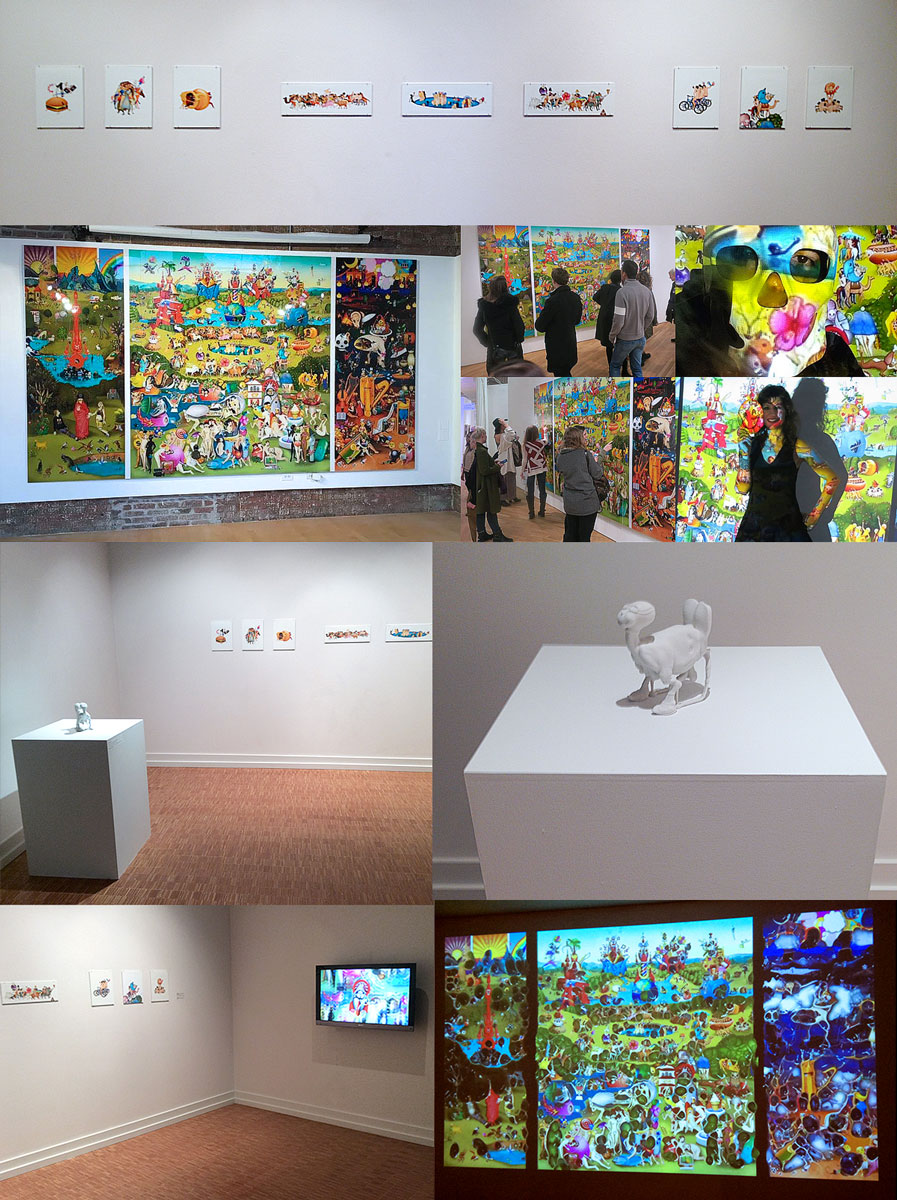 What made you decide to bring this piece into the digital realm? What do you think digitizing it brings to the piece?

As a static, physical print, made in direct homage to Bosch’s work, I have compressed all narrative elements into a “single frame,” so to speak. Even though there are hundreds and hundreds of “modern” emoji incorporated, the experience of reading the work is more classical, like a painting.

Digitally animating the triptych, using a short, looping format similar to a gif, felt like a way of making the piece even more relatable as a 21st century mashup, one indelibly linked to the internet.

I’ll also mention that once I set Eden, Earth and Hell into motion, I felt more like a storyteller in my own right, rather than an appropriator and translator of Bosch. I created new scenarios, like Hell freezing over, Eden barraged by fire and drought, and Earth suddenly depopulated of its human and animal species – all expressed with bright colors and culturally relevant “cute” icons.

That said, I don’t favor one form over the other. Theme and variation is a tendency in my practice. The physicality of the print work resonates as a kind of story-object, whereas the kineticism of the video speaks to hyper-mediated narrative.

Five centuries later art historians still puzzle over this and contemporary viewers continue to identify with it. Bosch’s depictions of a sprawling humankind engaged in folly, vice and debauchery align with many of our current cultural fascinations and concerns. In “…Earthly Delights” an ear, or a knife or a man with flowers in his backend, all sit on the surface similarly to how an emoji ear, or knife or flower bouquet does. One intention of the triptych was to mash up these classic and contemporary sign systems, and to diversify and expand the emoji lexicon through this process.

Another reason this particular work spoke to me is because I’ve never seen the original. (It’s on permanent display in the Prado Museum). I suppose my only knowing the piece as a virtual reproduction; combined with its epic popularity in the collective conscious, intuitively lead me to remix it as a kind of product of networked communication. The darker sequences, particularly in the Hell panel, are mitigated by the cheery emoji overlays. But in some ways, like how smiling clowns can be creepy, it’s disturbing to see eternally damned happy faces.

I’ve noticed that you work using a variety of mediums. Where do you feel most comfortable? And in what direction do you see your art developing?

Indeed I do. One of my “polymedia” projects may include video installation, 2D digital painting, 3D printed sculpture, an interactive application, drawing, performance, collaboration and the possibility of and…and…and…. “Where do I feel most comfortable” is a really good question. I mean we could be having this conversation via Twitter, Facebook, Skype, Google Hangout, text, email, phone or face to face. And in each of these contexts our communication would probably be slightly different. I’m not sure if I’m always comfortable with this condition of contemporary life, but I’ve adapted to it; and I’ve embraced it within my practice. For over 15 years I’ve been working in this rhizomatic way, and creatively it feels natural to me. Often times it entails working outside of my comfort zone, in terms of technology and content.

Regarding new developments in my art, I’m currently working on “The Selfie Drawings Project.” I began it in January of this year, and I’ve been making digital drawings of my “selfies.” There is a graphic novel like aesthetic to them, and I’ve been sharing them, in serialized form across various social media platforms. Unlike the immediate action of selfie photography, I’m “re-representing” myself, a mediated self, reflexively through a slow, more traditional act of drawing. Narratives, albeit nonlinear, have emerged regarding issues of surveillance, branded identity, age/body estimation, and agency online. Like in “..Emoji Delights” I’m fascinated by modes of virtual communication and ways in which these new modes collide with more historical forms of expression, revealing both constancy and change in human nature. In January 2016 I’ll be publishing a book of the 52 drawings that I’ve made throughout the course of 2015. I’ll also be having a solo show that same month at Transfer Gallery in Brooklyn, which will include time-based digital works that have evolved from the drawings.