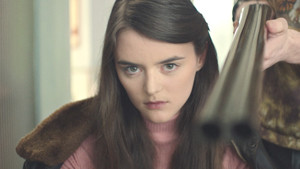 David Bertram’s “Don’t Sing” is a delightfully bizarre juxtaposition of fantasy and reality, following five people as they come to terms with their deepest and darkest desires. Through his work as both photographer and filmmaker, Bertram brings to us his understanding of identity. Here is our interview with this Paris-based filmmaker.

Where did the inspiration for “Don’t Sing” emerge from? Can you describe your collaboration with Data?

The inspiration comes first from the music. When I heard Don’t Sing for the first time, I was a bit confused because it’s a disco track made for dancefloors but there’s also a kind of melancholy into it, with these minor chords and those strange lyrics (Don’t sing about love, sing about war)… I thought that this ambiguity was a great starting point. David (aka Data) was clearly in line with this approach.

You write that in “Don’t Sing”, “five people fantasize about each other without knowing it”. Can you talk about the creative process that went behind your piece? How did you go about choosing the characters/developing the storyline?

I wanted to find an idea that embraces the ambiguity of the song. Fantasy versus reality quickly came to my mind. Fantasies often deal with sex and violence, so I’ve tried to find a setting and some characters that are nice and friendly : a typical American suburb seemed a good choice. As the idea was to present 5 characters in only 4 minutes, they needed to be some kinds of archetypes, easily recognizable. This way their fantasies don’t need more explanations at the end.

You currently work in both photography and film. How do you think your work in one of the mediums informs your work in the other? Is there a connection between “Don’t Sing” and your photographic series “Claytime”, for example?

I realized a few years ago that all I’ve been doing were closely or remotely related to identity. It’s the main theme of my work as an artist. Claytime and Don’t Sing are both expressions of it.

Is there anything you are currently working on or planning to work on in the near future that you’d like to talk about?

Besides music videos, I’m working on a short film and planning to work on a feature.